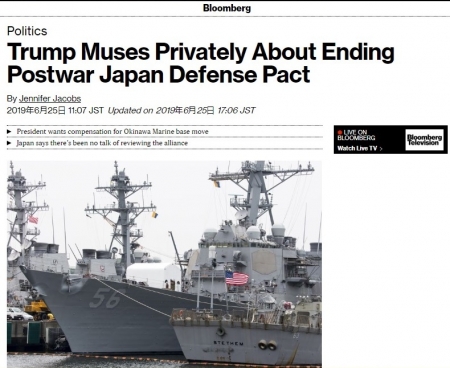 Trump has recently mused to confidants about withdrawing from a longstanding defense treaty with Japan he thinks treats the U.S. unfairly, sources say
Bloomberg @bpolitics - 2019年6月25日（火）

Trump sees Japan postwar defense treaty as too one-sided because it promises U.S aid if Japan is ever attacked but doesn’t oblige Japan’s military to come to America’s defense, sources say https://bloom.bg/2IHaSAn

President Donald Trump has recently mused to confidants about withdrawing from a longstanding defense treaty with Japan, according to three people familiar with the matter, in his latest complaint about what he sees as unfair U.S. security pacts.

Trump regards the accord as too one-sided because it promises U.S. aid if Japan is ever attacked, but doesn’t oblige Japan’s military to come to America’s defense, the people said.
The treaty, signed more than 60 years ago, forms the foundation of the alliance between the countries that emerged from World War II.

MacArthur On Board
Douglas MacArthur and Chester William Nimitz aboard the USS Missouri to sign Japan’s formal surrender in 1945.Photographer: Keystone/Getty Images
Even so, the president hasn’t taken any steps toward pulling out of the treaty, and administration officials said such a move is highly unlikely. All of the people asked not to be identified discussing Trump’s private conversations. While Trump’s repeated criticism of security pacts around the world has alarmed allies from Seoul to Paris, he hasn’t moved to withdraw from such agreements the way he has with trade deals.

Exiting the pact would jeopardize a postwar alliance that has helped guarantee security in the Asia Pacific, laying the foundation for the region’s economic rise. Under the terms of its surrender in World War II, Japan agreed to a pacifist constitution in which it renounced the right to wage war.

Japanese Chief Cabinet Secretary Yoshihide Suga said Tuesday in response to a question about the Bloomberg News report that the security framework was at the core of the country’s alliance with the U.S. “There is no talk at all of a review of the Japan-U.S. security alliance as has been reported in the media,” Suga said, echoing a statement by the foreign ministry.

Scrapping the treaty would risk ceding security of the Western Pacific to China and potentially spurring a fresh nuclear arms race, if Japan decided it needed to protect itself from nuclear-armed neighbors. It would also call into question the U.S.’s military commitments to Australia, the Philippines, South Korea, Taiwan and a host of other allies around the world.

Meeting With Abe
The president will make his second trip to Japan in a matter of weeks on Wednesday when he travels for the Group of 20 summit in Osaka. He’s expected to again meet with Japanese Prime Minister Shinzo Abe, who enjoys as good a relationship with the mercurial and unpredictable American president as any foreign leader.

Yet as with many U.S. allies, there are growing tensions between the countries over Trump’s attitude toward trade. The president has said he may enact tariffs on imports of foreign cars, calling them a threat to national security -- an allegation called preposterous by automakers and many U.S. lawmakers.

All About the U.S.-Japan Defense Treaty Irking Trump: QuickTake

The question of whether an American president can withdraw from a ratified treaty without congressional approval is unsettled. President George W. Bush withdrew from the Anti-Ballistic Missile Treaty in 2002 without lawmakers’ consent.

Trump regards Japan’s repeated efforts to move a large U.S. military base in Okinawa as a sort of land-grab, the people said, and has raised the idea of seeking financial compensation for American forces to relocate. Trump’s focus on the U.S. defense pact with Japan may foreshadow broader scrutiny of American treaty obligations across the world, two people familiar with the matter said.

The president has said in private conversations previously that he has Japan’s back and is aware of the U.S.’s obligations under the treaty. But, as with his stance on other multilateral agreements, he wants the relationship to be more reciprocal.

JAPAN-US-DIPLOMACY
Donald Trump aboard the USS Wasp at Yokosuka Naval Base on May 28.Photographer: Brendan Smialowski/AFP via Getty Images
“The U.S.-Japan alliance has never been stronger,” Trump told sailors and Marines last month aboard the USS Wasp, an amphibious assault ship at the naval base in Yokosuka, shared by the U.S. and Japan’s Self-Defense Forces. “This remarkable port is the only one in the world where an American naval fleet and an allied naval fleet headquartered side by side, a testament to the ironclad partnership between U.S. and Japanese forces,” he said.

At the same time, the president has long expressed skepticism of arrangements such as the North Atlantic Treaty Organization and the United Nations. He withdrew from the Trans-Pacific Partnership trade agreement and the Paris climate accord, both agreed by President Barack Obama, and has re-negotiated the North American Free Trade Agreement.

The U.S. defense treaty with Japan was first signed in 1951 along with the Treaty of San Francisco that officially ended World War II. The defense pact, revised in 1960, grants the U.S. the right to base military forces in Japan in exchange for the promise that America will defend the island nation if it’s ever attacked.

For decades after the war, Japan refrained from developing offensive capabilities such as long-range bombers, aircraft carriers and nuclear weapons. But Abe, a relatively hawkish leader, believes his nation should take a more robust role in its own defense. He pushed through a controversial interpretation of the constitution to allow Japanese forces to come to the aid of allies.

Japan is buying advanced F-35 fighter planes from the U.S. and will fly some of them off warships effectively refashioned as aircraft carriers, its first since the war. In May, the country’s ruling Liberal Democratic Party recommended the government eventually raise defense spending to about 2% of gross domestic product, in line with NATO recommendations for its members and a threshold Trump has said should be a minimum for U.S. allies.

‘Cornerstone of Peace’
There are currently about 54,000 U.S. military personnel based in Japan, a permanent troop presence that allows the U.S. to more easily project force across the Pacific. U.S. Forces, Japan, calls the arrangement “the cornerstone of peace and security in the Pacific” on its website.

It isn’t clear how those forces would be affected if Trump withdrew from the treaty. The president has frequently complained that U.S. allies hosting American bases don’t pay enough money for what he considers a privilege, and he could seek to negotiate a new or revised treaty that entails more Japanese financial support for the U.S. military presence.

While the president did not refer to the base by name in his recent conversations, there has been a running dispute surrounding Marine Corps Air Station Futenma on Okinawa. The American presence has been controversial for more than two decades, since three servicemen raped a 12-year-old Okinawan girl in 1995. Local people still attribute the presence of the base to higher rates of crime and accidents in the area, according to the Council on Foreign Relations.

James Carafano, vice president of foreign and defense policy studies at the Heritage Foundation, said he doubts the U.S. will withdraw from the treaty with Japan.

“There’s nothing that says we have to abide by treaties for all eternity,” Carafano said. “I just doubt we will revisit U.S. policy on the U.S.-Japan strategic alliance,” which he also referred to as the “cornerstone” of U.S. foreign policy in Asia.

GUAM OKINAWA
Futenma U.S. Marine Base in Okinawa.Photographer: Hiroaki Maeshiro/Bloomberg
Abe reached a deal in 2013 with Obama to move the base out of Okinawa as early as 2022 if a replacement could be constructed. But Trump believes the land underneath the base is valuable for development, and has told confidants the real estate could be worth about $10 billion, the people said.

He considers the situation another example of a wealthy country taking advantage of the U.S., the people said.

— With assistance by Isabel Reynolds, Emi Nobuhiro, and Jon Herskovitz

(Updates with response for Japanese government in fifth paragraph.)
From The Web