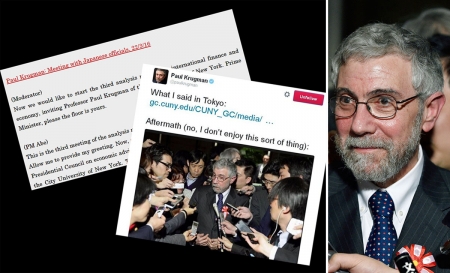 これは凄い！ 麻生太郎がデフレ脱却の決めては戦争ではないか？
とクルーグマン教授に質問している証拠が、
クルーグマン教授の議事録に明記されていたとのこと。
＊＊＊＊＊＊＊＊＊＊＊＊
”Minister of Finance Aso
麻生財務大臣
"During the 1930s, I remember that in the United States likewise there was a situation of deflation.
1930年代にアメリカ合州国もデフレの状況にあったと私（麻生太郎）は、記憶している。
…中略…
What solved the question?
この問題を何が解決したか？
War!
戦争だ！
Because World War II had occurred during the 1940’s and that became the solution for the United States…”
何故なら、1940年代に第二次世界大戦を起したことで、アメリカ合州国は（デフレの）解決に至ったから・・・

そして、クルーグマン教授は「戦争以外の打開策を見付けなければならない」と回答したようです。
we are looking for ways to achieve something like that without war.

(Minister of Finance Aso)
During the 1930’s, I remember that in the United States likewise there was a situation of deflation. And the New Deal policies have been introduced by then President
Roosevelt. As a result, it worked out very nicely, but the largest issue associated with it is that for a long period of time entrepreneurs and managers of companies did not go to make a capital investment by receiving the loan. It had continued up until the late 1930’s and that is the situation occurring in Japan too.
The record high earnings have been generated by the Japanese companies but they would not spend in the capital investment.
There are lots of earnings at hand on the part of the corporate in Japan.
It should be used for wage hike or dividend payment or the capital investment, but they are not doing that.
They are just holding onto their cash and deposits. Reserved earnings have kept going up.
A similar situation had occurred in the US in the 1930’s.
What solved the question?
War!
Because World War II had occurred during the 1940’s and that became the solution for the United States.
So, let’s look at the entrepreneurs in Japan.
They are stuck with the deflationary mindset.
They have to switch their mindset and should start making capital investments.
We are looking for the trigger.
That is the utmost concern.

(Prof. Krugman)
The important point about the war from the macroeconomic point of view is that it was a very large fiscal stimulus.
That fact that it was a war is very unfortunate.
It was simply something that led to a fiscal stimulus that would not otherwise have happened.
In fact, the story in the 1930’s was that the New Deal, Roosevelt backed off the fiscal stimulus in 1937, because then, as now, there were many calls for balancing the budget.
That was a terrible mistake. It caused the major second recession.
Yes, obviously we are looking for ways to achieve something like that without war.