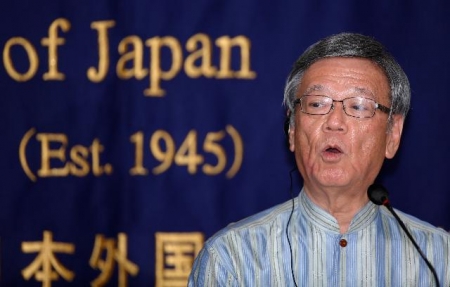 Okinawa Gov. Takeshi Onaga speaks during a press conference at the Foreign Correspondents’ Club of Japan in Tokyo Wednesday, May 20, 2015. Onaga said in an interview with The Associated Press Wednesday that he would head to Washington to convey local objections to a plan to relocate a U.S. air base. A plan set in 1996 would move U.S. Marine Air Station Futenma to a less developed area of Okinawa island.
(AP Photo/Shizuo Kambayashi)

Is Okinawa governor Onaga Takeshi Japan’s bravest man?
Who else, we might ask, would have the courage to steadfastly defy the governments of Japan and the United States, the U.S. Pentagon, the virulent and sometimes violent right wing fringes of Japanese politics, and most of the generally pliable, but pro-Abe, Japanese media?
Onaga’s predecessor, Hirokazu Nakaima, was, in the end, unable to withstand the pressure and threats, or to resist the blandishments, from these sources, finally caving and reversing himself.
Against much skepticism and deflated expectations, Onaga is proving to be made of sterner stuff.

Onaga’s cause is stopping the so-called “relocation” of the Futenma U.S. Marine Air Station, a base located in the middle of a mid-sized city, Ginowan City, on the island of Okinawa, to another part of the island prefecture, Henoko in Nago City.
In actuality, what is taking place is more than a small base “relocation.”
It is the planned construction of a massive new all-purpose base, the first large scale American base to be built in Japan since the 1950s.
To the citizens of Okinawa, and certainly to the residents of Henoko, the long-opposed new base constitutes a further dangerous concentration of military forces, and especially foreign military forces, in their small island prefecture.
To many if not also a majority of Japanese (and as well as many concerned persons abroad—see below) the new base represents a deeply resented, unjustifiable and unwanted symbol (and reality) of a seemingly perpetual, ineradicable American military presence (for residents of Okinawa, never ending extra-territorial occupation) in Japan.
Last year, following years of delay owing mainly to local opposition, the government of Prime Minister Shinzo Abe began landfill work in the bay next to Henoko in the first stage of new base construction.
The work was began immediately following the approval by the former governor Nakaima of a landfill permit (something he had pledge not to do). Loud local protests, charges of betrayal and organized efforts to block work followed.

On September 14 Onaga announced his “unhesitating” decision to proceed with cancelling the landfill permit.
Calling together to the prefecture government office and addressing a meeting of local and national opposition (Communist, Social Democrat, and Okinawa Social Mass Party among others) delegates, Onaga declared the turning of “a new historic page” in the struggle with Tokyo.
The Abe government (and the U.S. Pentagon) apparently determined to continue the landfill portends an unprecedentedly grave and a potentially cataclysmic clash.
Now a deadlock between the Tokyo and Naha governments through next summer’s upper Diet house elections, and possibly a court case (which in Japan, inevitably becomes a quagmire) seem possible, if not likely.
The Okinawa-Tokyo drama is being staged against the backdrop of the Abe government’s final, all-out push for Diet approval of new (U.S. Pentagon backed) defense and security legislation that will replace Japan’s postwar pacifist, passive, geographically self-limiting, self-defense only military posture.
Central to the legislation is a reinterpretation of Article 9 of Japan’s “Peace Constitution”–the renunciation of war clause—specifically to allow Japanese forces to engage in in “collective self-defense.” i.e., to join in hostilities involving allies (read: defending American forces) even when Japanese forces or Japan have not been attacked.