Japan Coast Guard responds with violence
to residents opposing the construction
of new US air base in Henoko
September 11, 2014 − Ryukyu Shimpo 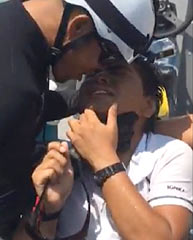 On September 8, in Henoko, Nago,
a member of the coast guard yelled at a resident
opposing the construction of a new US air base
for replacement of the Futenma base.
(Photograph provided by a reader of Ryukyu Shimpo.)


Japan Coast Guard responds with violence to residents
opposing the construction of new US air base in Henoko
September 11, 2014 − Ryukyu Shimpo

Coast guard officers are employing violence against residents amid increasingly heated protest against work to relocate US Marine Corps Air Station Futenma to an offshore site in Henoko, Nago. On September 9, at the construction site, members of the coast guard yelled at a resident while pressing his neck and twisting his arm. The violence was witnessed by onlookers. Since the coast guard began carrying out its security operations in Henoko, it has not responded to news media inquiries.

Senior officials of the coast guard have said they see it as a crime if residents enter an area of the sea cordoned off by buoys. The 11th Regional Coast Guard Headquarters also suggested to Okinawa Prefectural Assembly members that the coast guard would respond with force if citizens moved into the restricted area, referring to regulations such as the Act on Special Measures Concerning Criminal Cases. However, the officials did not comment on individual cases. The coast guard maintains their tough stance against the residents’ protest.

As of September 10, some residents had been injured by the coast guard members’ violence and required medical attention. However, the Japan Coast Guard headquarters in Tokyo says they have no information regarding whether or not there have been any injuries to residents as a result of its security activities in Henoko. One of the injured residents submitted a complaint to the Nago branch of the Naha District Public Prosecutors Office on September 9. The prosecutors’ office accepted the indictment, and it has begun an investigation.