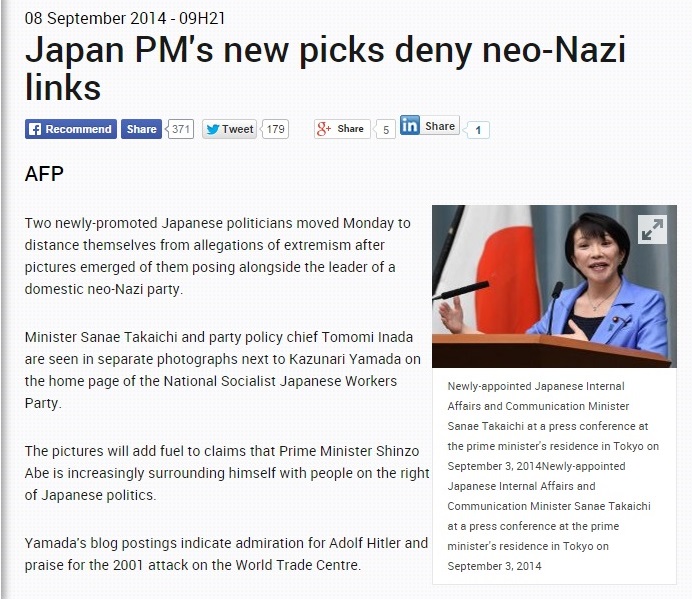 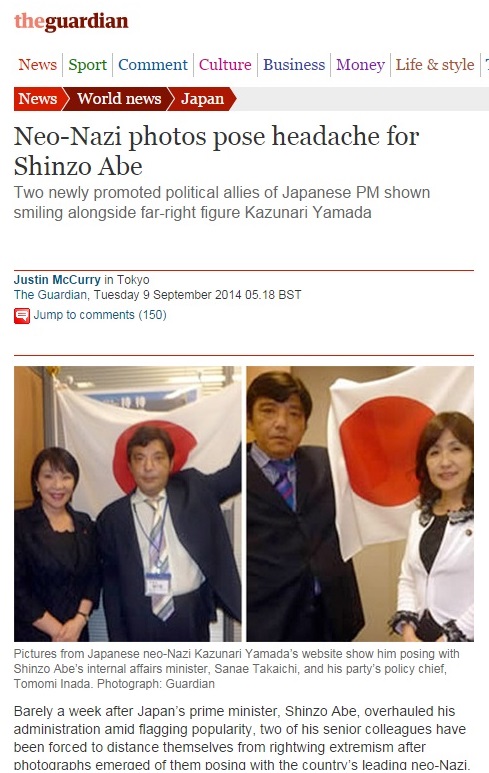 Two newly-promoted Japanese politicians moved Monday to distance themselves from allegations of extremism after pictures emerged of them posing alongside the leader of a domestic neo-Nazi party.

Minister Sanae Takaichi and party policy chief Tomomi Inada are seen in separate photographs next to Kazunari Yamada on the home page of the National Socialist Japanese Workers Party.

The pictures will add fuel to claims that Prime Minister Shinzo Abe is increasingly surrounding himself with people on the right of Japanese politics.

Yamada's blog postings indicate admiration for Adolf Hitler and praise for the 2001 attack on the World Trade Centre.

In video footage posted on the website, Yamada is seen wearing a stylised swastika during street demonstrations.

Captions for the photographs claim they were taken "sometime in June or July 2011 when (Yamada) visited the conservative lawmakers for talks".

Spokesmen for both senior lawmakers acknowledged Monday that the photographs were genuine and had been taken in their offices over the last few years, but denied there was any political affiliation.

"He was an assistant for an interviewer, and was taking notes and photos," a member of staff at Takaichi's office told AFP, referring to Yamada.

"We had no idea who he was back then, but he requested a snap shot with her. (The minister) wouldn't refuse such requests."

Following media enquiries, the office has asked that the pictures be removed, he said.

"It was careless of us," he said, adding that Takaichi did not share Yamada's view "at all... it is a nuisance".

A staffer at Inada's office said the Liberal Democratic Party (LDP) policy chief did not subscribe to Nazi ideology.

"It is disappointing if there are people who would misunderstand that she does," he said.

Abe has courted criticism for his strident nationalism and views on history that some find unpalatable.

In particular his unwillingness to condemn Imperial Japan's behaviour up to and during World War II has proved a sticking point in international relations.

His equivocations about the formalised system of sex slavery -- known euphemistically as "comfort women" -- has particularly irked South Korea and China, and both regularly call on him to re-think his views.

Takaichi and Inada have both visited Yasukuni Shrine, the supposed repository of the souls of Japan's war dead, including a number of convicted war criminals. The shrine is seen in Asia as a symbol of Japan's lack of repentance for the war.

Barely a week after Japan’s prime minister, Shinzo Abe, overhauled his administration amid flagging popularity, two of his senior colleagues have been forced to distance themselves from rightwing extremism after photographs emerged of them posing with the country’s leading neo-Nazi.

Sanae Takaichi, the internal affairs minister, was among a record-equalling five women selected by Abe as he attempts to make his cabinet more female voter-friendly and to increase women’s presence in the workplace.

Takaichi, an Abe ally on the right of the governing Liberal Democratic party (LDP), was pictured posing alongside Kazunari Yamada, the 52-year-old leader of the National Socialist Japanese Workers party, on the neo-Nazi party’s website.

A smiling Takaichi and Yamada appear together standing in front of a Japanese flag.

Yamada has voiced praise for Adolf Hitler and the September 2001 terrorist attacks on the World Trade Centre. In a YouTube video Yamada’s supporters are seen wearing swastika armbands, while he denies the Holocaust took place and criticises postwar Germany’s ban on the Nazi salute, accusing the country of being “no different from North Korea”.

Takaichi met Yamada “for talks” at her office in the summer of 2011, according to her office. Confirming the photographs were genuine, a spokesman for Takaichi claimed her office had been unaware of Yamada’s extremist views at the time.

“[He] was an assistant to an interviewer and was taking notes and photos,” a member of Takaichi’s staff told AFP. “We had no idea who he was back then but he requested a snap shot with her. [She] wouldn’t have refused such requests.”

Media coverage prompted her office to request that the photographs be removed but by then they had already been widely circulated on social media.

“It was careless of us,” the staff member said, adding that Takaichi did not share Yamada’s views “at all … it is a nuisance”.

A second photograph shows Yamada standing alongside Tomomi Inada, another close Abe ally who was given the powerful job of LDP policy chief. Inada’s office was quick to distance the MP from Yamada, whose website celebrates the “samurai spirit” and proclaims that the “sun shall rise again”, saying it would be disappointed if the photograph led people to “misunderstand what she does”.

While there is no evidence that either politician shares Yamada’s neo-Nazi ideology their appointment has fuelled accusations that Abe is taking his administration even further to the right.

Takaichi and Inada have both visited Yasukuni shrine, which honours Japan’s war dead, including 14 class-A war criminals; last week, Takaichi said she would visit Yasukuni again, this time in her role as minister. “I’ve been visiting Yasukuni as one Japanese individual, to offer my sincere appreciation to the spirits of war dead,” she told reporters. “I intend to continue offering my sincere appreciation as an individual Japanese.”

China and South Korea view politicians’ pilgrimages to the shrine as evidence that Japan has yet to atone for atrocities committed on the Asian mainland before and during the second world war.